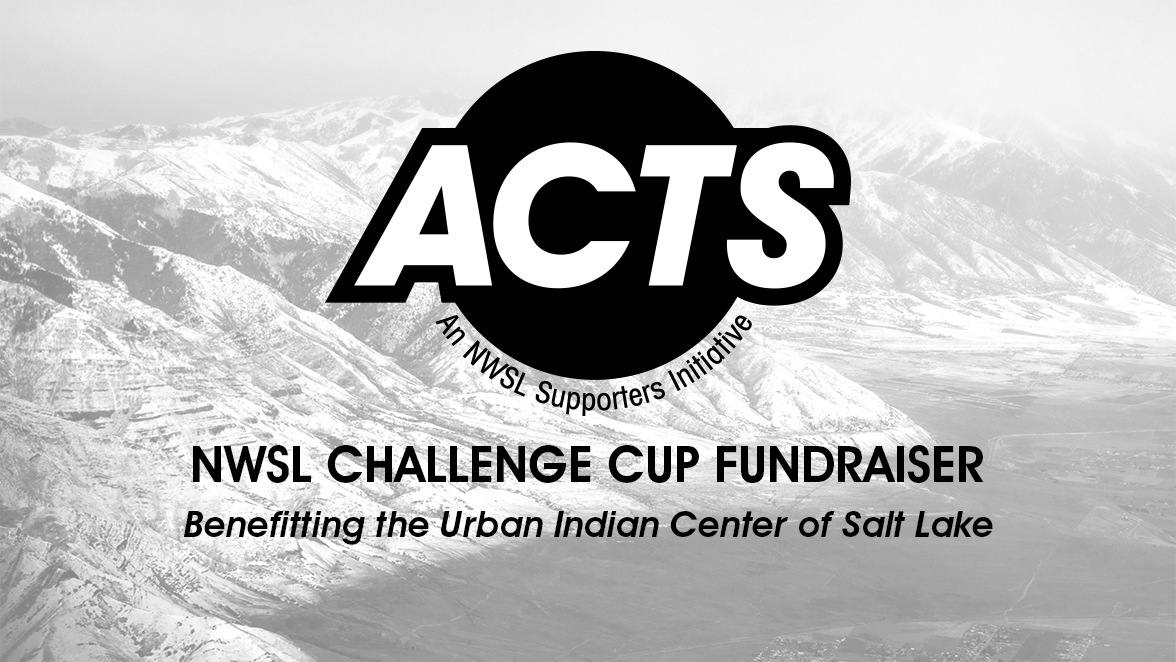 “Service to our local communities has always been a part of NWSL supporters culture. With all eyes being on the Challenge Cup in Utah this summer, we thought it would be best to pool our efforts into one fundraising campaign that will benefit an organization that serves the greater Salt Lake City area. ACTS was created to provide a unified voice for its member clubs, both for the current UICSL project and others moving forward,” said Jen Muller, ACTS organizer and an officer of Cloud 9 Supporters Club.

These groups are using the unique opportunity of the Challenge Cup to raise awareness of issues faced by the Indigenous communities of Utah, the site of the tournament, and to raise funds for the Urban Indian Center of Salt Lake (UICSL) during the ongoing COVID-19 pandemic.

“Public health concerns, including the COVID-19 pandemic, often have an outsized impact on Native American communities. As NWSL supporters tune in to the Challenge Cup tournament in Utah we also want to draw the focus of the NWSL communities to the challenges faced by Native American tribes in the area as well as the good work being done by organizations like the UICSL to meet those challenges,” said Maggie Dziubek, ACTS and Chicago Local 134 organizer.

“We’re honored that the Activating Communities Through Support (ACTS) Project has pledged to raise funds for the Urban Indian Center of Salt Lake (UICSL),” said Maurice “Mo” Smith, Executive Director of UICSL. “Their commitment to financial support and to raise awareness of issues faced by the Native Americans and the eight Federally-Recognized Sovereign Tribes of Utah is timely during these unprecedented times due to COVID-19 known as the Coronavirus. They recognize the importance of supporting community-based organizations whose missions are aligned with promoting racial and ethnic approaches to community wellness.”

ACTS organizers are partnering with Prideraiser.org, a platform which uses soccer to facilitate fundraising for local LGBTQ+ organizations, for the event. “Our volunteer team is thrilled to work with the NWSL supporters on this initiative. It’s a perfect fit with our principles and our technology, and we are happy to donate the Prideraiser platform to the cause” said Prideraiser.org co-founder Galen Riley. Soccer fans can visit the Prideraiser site to make a pledge for each goal scored by their favorite team or across the entire tournament. At the end of the NWSL Challenge Cup, Prideraiser will notify participants to complete their donation.

To learn more about the ACTS UICSL fundraiser and to make a pledge, visit https://acts.prideraiser.org.

ABOUT ACTS
ACTS is a coalition of supporters groups representing all nine teams of the National Women’s Soccer League (NWSL). It was created to serve as a collective voice for philanthropic endeavours organized by its member clubs.

ABOUT PRIDERAISER
Accidentally founded in 2017, Prideraiser is a coalition of independent soccer supporters that raise money for LGBTQ+ causes every June. The Prideraiser website enables soccer fans to pledge per goal their team scores, culminating in donations to an LGBTQ+ organization in their community at the end of the campaign. Prideraiser is dedicated to cultivating welcoming, inclusive soccer communities and, to date, has helped raise more than $184,000 and has introduced the beautiful game to countless new fans. For 2019, Prideraiser included over 40 campaigns in cities in the United States and Canada. Learn more at prideraiser.org.