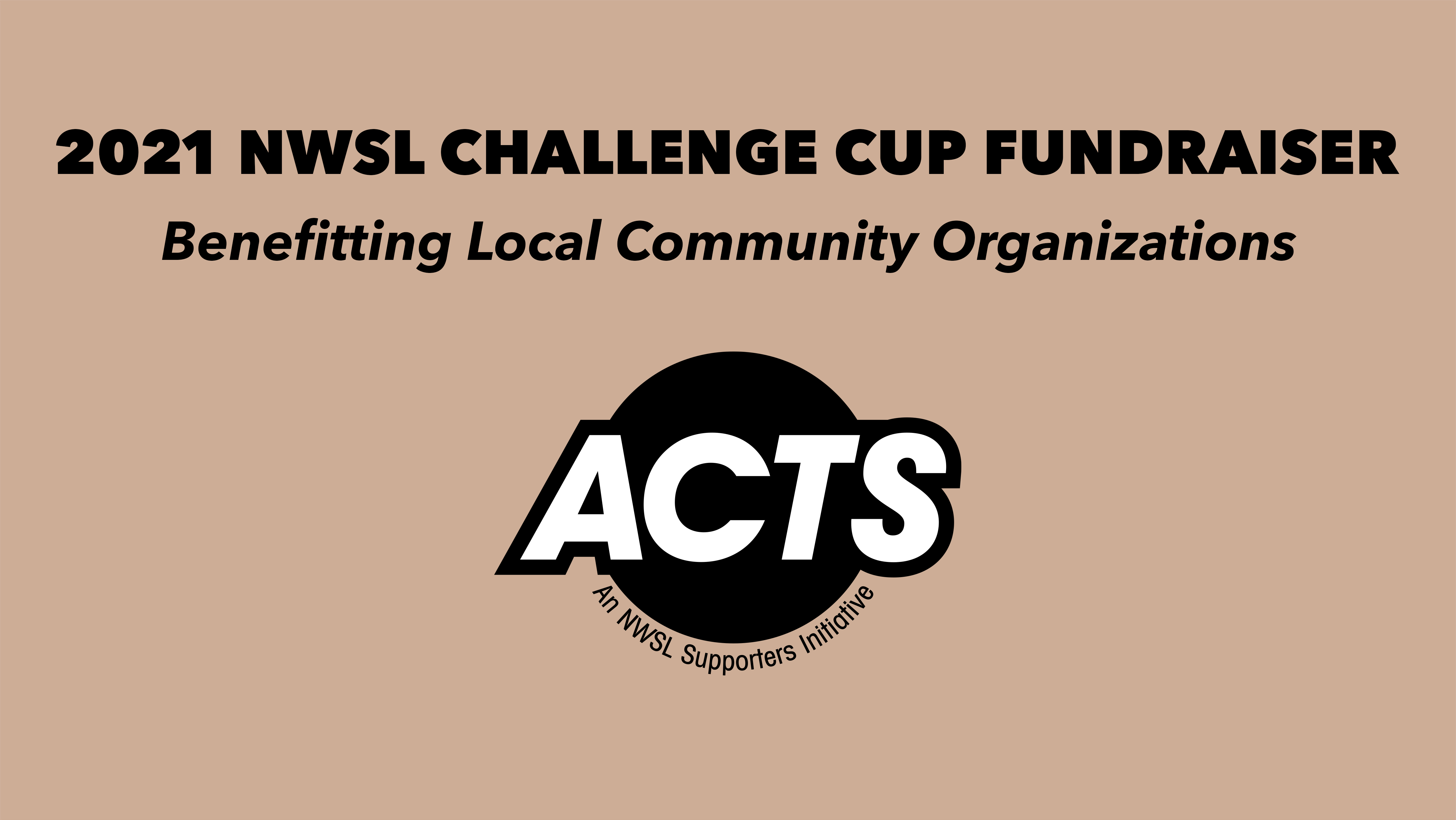 April 7, 2021 – The NWSL supporters initiative ACTS: Activating Communities Through Support, is continuing efforts to support NWSL communities with its second collective project. This campaign is centered on the 2021 NWSL Challenge Cup, taking place April 9 through May 8.

“It is a pleasure to be able to bring together our passion for soccer in such a way that can have a positive impact on our community as well. While we are not able to support our clubs in our more traditional ways, I am proud that we are finding new and creative ways to bring our supporters together for the Challenge Cup,” said Gab Rosas, ACTS organizer and Rose City Riveters Steering Committee Chair.

Last year’s ACTS Challenge Cup Fundraiser saw over $27,000 in pledges raised for the Urban Indian Center of Salt Lake. With NWSL teams playing in their home markets for this year’s tournament, each supporters group will raise funds and awareness for a local organization that promotes social justice and equality in their local communities.

The organizations that will benefit from this fundraiser are:

In addition to their local community organizations, ACTS will be highlighting the efforts of the Black Women’s Player Collective (BWPC). During the campaign fans will be able to pledge in support of the BWPC’s GoFundMe, proceeds of which benefit their 2021 programming.

“We’re excited to have the BWPC as one of the beneficiaries of this year’s campaign. The work that BWPC players have done over the past year–both individually and as a whole–was an inspiration for the nonprofits chosen by ACTS supporters groups. We’re privileged to have this opportunity to shine a light on the important endeavors of community organizers, as well as those of the women of the BWPC,” said Jen Muller, ACTS organizer and a leader of Cloud 9 Supporters Club.

On behalf of the BWPC Executive Board, Imani Dorsey from NJ/NY Gotham FC added, “Thank you for choosing the BWPC to be an ACTS Initiative organization. We aim to use our platform to elevate and enhance the experience of the black, female soccer player and your donations help make that possible. Thank you for your commitment to the black women of the NWSL and the vision we have for the BWPC.”

ACTS organizers are partnering with Prideraiser.org, a platform which uses soccer to facilitate fundraising for local LGBTQ+ organizations, for the event.

“Our volunteer team is thrilled to work with the NWSL supporters on this initiative. It’s a perfect fit with our principles and our technology, and we are happy to donate the Prideraiser platform to the cause,” said Prideraiser.org co-founder Galen Riley. Soccer fans can visit the Prideraiser site to make a pledge for each goal scored by their favorite team or across the entire tournament. At the end of the NWSL Challenge Cup, Prideraiser will notify participants to complete their donation.

To learn more about the 2021 ACTS Challenge Cup Fundraiser and to make a pledge, visit https://acts.prideraiser.org.

ABOUT ACTS
Formed in the lead up to the 2020 NWSL Challenge Cup, ACTS is a coalition of supporters groups representing teams of the National Women’s Soccer League (NWSL). It was created to serve as a collective voice for philanthropic endeavours organized by its member clubs.

ABOUT BLACK WOMEN’S PLAYERS COLLECTIVE
Black Women’s Player Collective is an organization that elevates the image, value, and representation of Black women as athletes and leaders in business, industry and public and private institutions. 2021 BWPC programming includes: hosting free soccer clinics at our mini pitches across the country, presenting opportunities for kids to attend NWSL games throughout the upcoming season, and producing media that shares insights of Black women and their experiences in both sport and business.

ABOUT PRIDERAISER
Accidentally founded in 2017, Prideraiser is a coalition of independent soccer supporters that raise money for LGBTQ+ causes every June. The Prideraiser website enables soccer fans to pledge per goal their team scores, culminating in donations to an LGBTQ+ organization in their community at the end of the campaign. Prideraiser is dedicated to cultivating welcoming, inclusive soccer communities and, to date, has helped raise more than $211,000 and has introduced the beautiful game to countless new fans. For 2019, Prideraiser included over 40 campaigns in cities in the United States and Canada. Learn more at prideraiser.org.